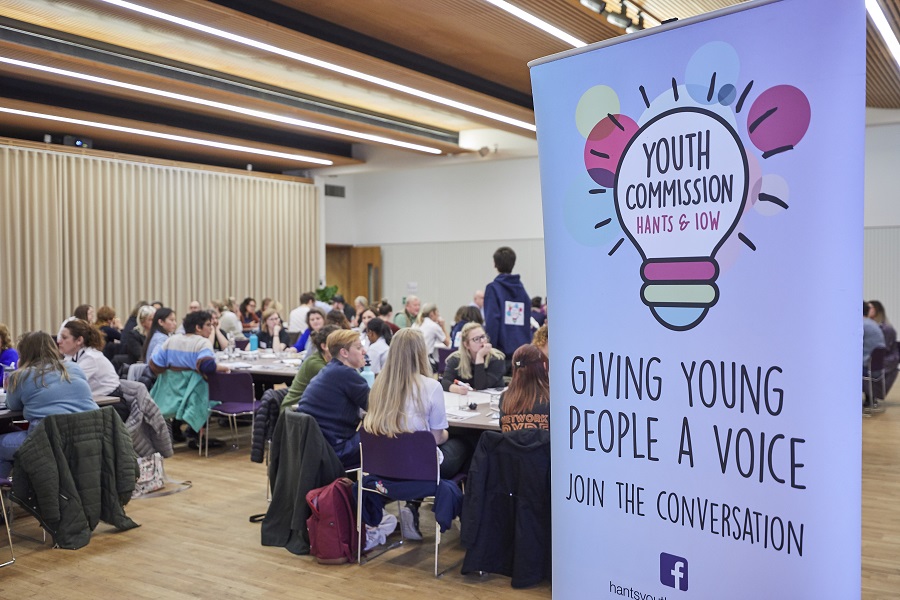 The Police and Crime Commissioner welcomed the Youth Commission’s Big Conversation findings and recommendations at a conference on Saturday 23 November.

A consultation by the Police and Crime Commissioner’s Youth Commission has found that substance misuse is the biggest crime and policing related concern of young people, with 35% of those taking part in the big conversation selecting it as their top priority.

During 2019 the Youth Commission consulted over 2,600 of their peers across Hampshire, the Isle of Wight, Southampton and Portsmouth to identify the most important crime and policing issues for young people and the actions they feel can be taken locally to make improvements.

At the Youth Commission’s conference members put 10 recommendations to the Commissioner, Hampshire Constabulary and partner agencies that work with young people. The recommendations set out how young people would like to see organisations work together to make improvements in the support, information, services and advice that is available for young people.

Youth Commission member, Caitlin O’Farrell, 19 from Portsmouth, said: “Throughout the year members of the youth commission have gone to 87 events in order to gather feedback from as many young people as possible. This has ranged from talking to schools and colleges, going to events at universities, going to the Princes Trust or doing workshops with young offenders. We hope that our recommendations will have an impact on whoever hears them in order to improve the experiences of young people in Hampshire. Having read some of the responses people have given, I have been surprised by how many people have opened up to discuss these priorities, and I hope more young people are encouraged to discuss and tackle issues that could impact their future.”

Youth Commission member, Jordan Fewings, 20, from Havant said: “I chose substance misuse as I wanted to spread awareness of the lies around drugs and alcohol. Drugs are glorified by people which makes young people want to do it more. The substance misuse group is getting the truth out there and hopefully changing one person’s mind at a time through each event”

Youth Commission member, Ben F, said: “Unhealthy relationships are not issues that will naturally go away necessarily, so our recommendations all involve actively tackling this issue, as it is more important than ever that we recognise the detrimental nature of negative relations. From the big conversation we realised that more people are concerned about, and have experienced first or second-hand, unhealthy relationships. We continue to urge everyone to be educated about spotting the signs of those who are vulnerable and being harmed, as well as telling those people that they shouldn’t accept their circumstances and should reach out for help.”