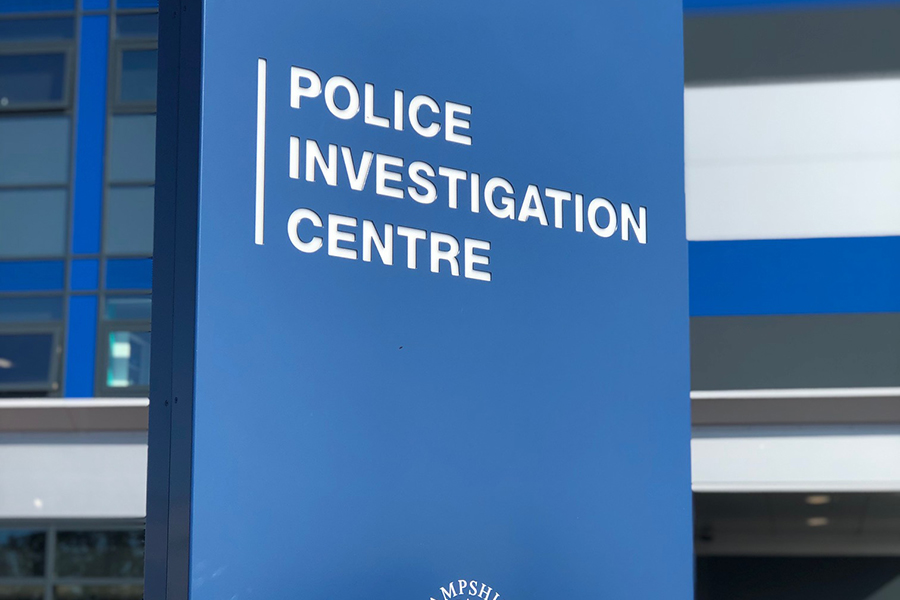 I was excited to visit Portsmouth’s new custody suite. I have heard that this new Police Investigation Centre (or PIC) is a flagship building. I’d been to Portsmouth’s old suite a few years back and the winding corridors and lack of staff space had felt a bit cramped and claustrophobic so I was keen to see what had changed. More than that, I love that it’s called EPIC. My seven-year-old calls all good things ‘epic’, it felt like a good omen and I was pleased to be welcomed along for a shift.

I was not disappointed.

There is so much to say about East Hampshire Police Investigation Centre so I will focus on the things that stood out.

The building itself is lovely. It has natural light, high ceilings, wide corridors and a large space for staff to work comfortably. These are all physical features that contribute to a better working atmosphere. PICs are not new, though, and I have seen similar buildings before. Even so, EPIC stood out. My tour started in the discrete booking in area. This single room was the best that I have seen and I was told that vulnerable detainees are taken in there to be booked in and out, the idea being that additional privacy gives them an opportunity to disclose any worries or vulnerabilities away from the pressure of the booking in desk.

What also stood out was the focus on staff wellbeing. Small features that made a difference – the air movement had been designed to stop build up of smells. This can be an issue in some suites, but was not in EPIC. There was also a separate staff area with TV, fridge, kettle and more so that staff could spend some time away from the pressures of the suite during the shift. This was a big shift from the last suite where staff had little choice, but to go out (not ideal at 3am on a winter morning) or more or less stay where they worked. The sergeant also told me that they have staff car park spaces, separate from the comings and goings of the suite. So much of how a custody suite runs depends on staff wellbeing; this was good to see.

As I continued my tour, I saw a ‘first’. A female detainee was able to use a shower behind a real door. All custody showers that I have seen have saloon style doors – with the top and bottom missing – so often don’t feel private. The detainee in the suite was able to have a shower in the privacy of a room whilst we walked through the corridor outside. The detention officer I saw discussed how the new changes to improved menstrual care (instigated by ICVs and pushed forward by ICVA) had meant that she now had a good range of stock available, when she’d previously been in situations where she’d had inappropriate stock to offer. Hooray. These are exactly the kind of wellbeing issues that ICVs seek to promote and it was great to see.

The rest of the tour went well, detainees were well managed and cells were new and working well. The suite included a visitors’ room, where detainees could see family members and friends, and phones in the cells where they could speak to them. The design of the suite meant that all was calm as sergeants were able to manage detainees in holding rooms, being booked in and being moved well. I then settled down behind the desk and watched what happened and had a chat with staff to see how things ran.

EPIC is a lovely suite, it’s true, but the suite itself is not what I will remember, it’s the care that I witnessed. In any custody suite on a weekend, you are bound to see some vulnerable detainees and I did. The care I saw was superb.

Without going into the details of the cases, I saw some children booked into custody for the first time. Their stays were controlled and planned. Their Appropriate Adults (AA) were able to stay in the cells with them. The sergeant took time out to explain the custody process and what to expect, making tea for the AA and reducing unnecessary stress and worry. I saw a vulnerable detainee, clearly at a personal low and the sergeant again take time out to check in with him, let him know that if he felt at a bad ebb that someone would come to talk to him in the cell to help reduce his stress. I saw a homeless person with very complex needs get some truly exceptional care. Another sergeant who booked him in spoke to him by first name, made sure he felt calm, explained when he’d see the nurse and get his medicine. The liaison and diversion service were knowledgeable and friendly. There was a clear focus on getting detainees support to try to prevent future problems and arrests.

I cannot complete this blog without mentioning the food. We tend to see box meals in custody; they are stored at room temperature and are long life. They tend to be low in calories and it’s not unusual to see staff doubling up for hungry detainees. This was not the case at lunchtime in EPIC. Detainees were cooked fresh food (burgers and chips) that smelled delicious. I was happy with my packed lunch, but it was great to see real food delivered to the cells.

EPIC is described as a flagship suite. This is a high bar, but I think that it’s well deserved. I was so impressed with the focus put into its design, staff wellbeing and detainee care. The hope is that suites like this attract and retain good staff, help maintain calm and that detainees can receive services they need to get their life back on track or move on to the next stage of the criminal justice system with dignity. Everything that I saw in EPIC brought these ideas to life and I will be encouraging my colleagues to come to see this epic place.

ICVA Chief Executive since 2015, Katie leads reforms in governance, structure and mission and developing the vision of ICVA today. She has provided a national voice for schemes and has influenced national policy on police custody. Katie joined ICVA from a senior management role working on the victims’ perspective of the criminal justice system. Katie has worked in policing for over a decade for both police authorities and police and crime commissioners.