Police and Crime Commissioner Donna Jones is urging potential victims of drink spiking to report to police and get tested quickly this New Year’s Eve.

In the lead up to the celebrations, the National Police Chief’s Council has shared spiking statistics for England and Wales stating that nearly 5,000 cases were reported nationally between October 2021 and September 2022.

Spiking is when someone puts alcohol or drugs into another person’s drink or body without their consent or knowledge. This is illegal even if no other offence is committed. Common spiking symptoms are confusion, lack of coordination, slurred speech, nausea, hallucinations, vomiting, paranoia and unconsciousness.

PCC Donna Jones said: “These crimes significantly affect the feelings of safety among women and girls. Men are victims too, however reports from women and girls make up the majority of incidents, and mostly affect an age group between 18-22-years-old.

“As Commissioner I am committed to making the streets safer for young women, to ensure they feel safe going out, free from fear of violence, in public, private and hospitality venues.

“I know that Hampshire and Isle of Wight Constabulary’s Licensing Team have been working with bar management throughout the counties and invested widely in awareness, prevention and training on safeguarding victims, as well as targeting potential perpetrators, and continue to do so in order to reduce these crimes.

“The force also invested in multi-drug testing kits so that evidence can be gathered quickly.”

“Being a victim of spiking can be incredibly scary. I think it is still a very much under-reported crime because victims think that they will not be believed. Delays in reporting mean police are unable to gather the evidence they need to confirm a spiking has happened and launch an investigation.

“I want people to have the confidence to report, and be reassured that police will take it seriously. The message this New Year’s is make sure you report as soon as possible, and get tested by the police.”

If you’re concerned you or a friend have been spiked, call police straight away using 999. Multidrug testing kits can get the early evidence they need, and can provide valuable reassurance. 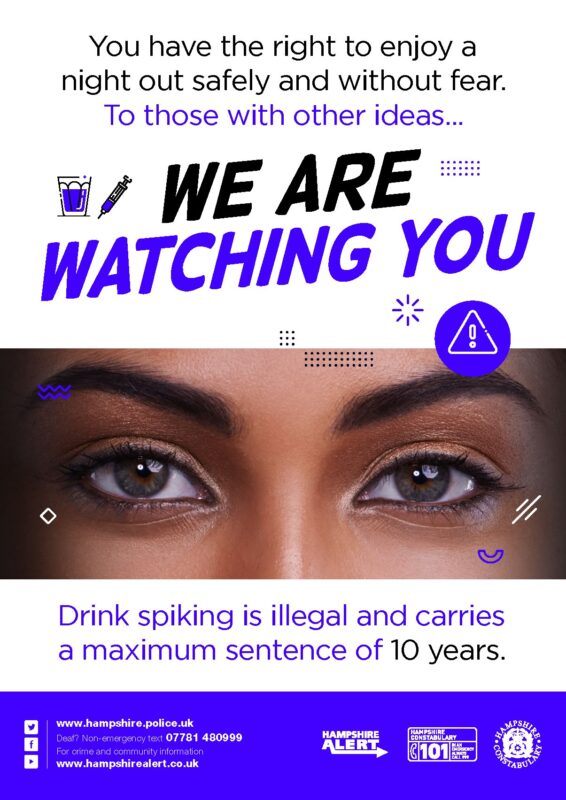