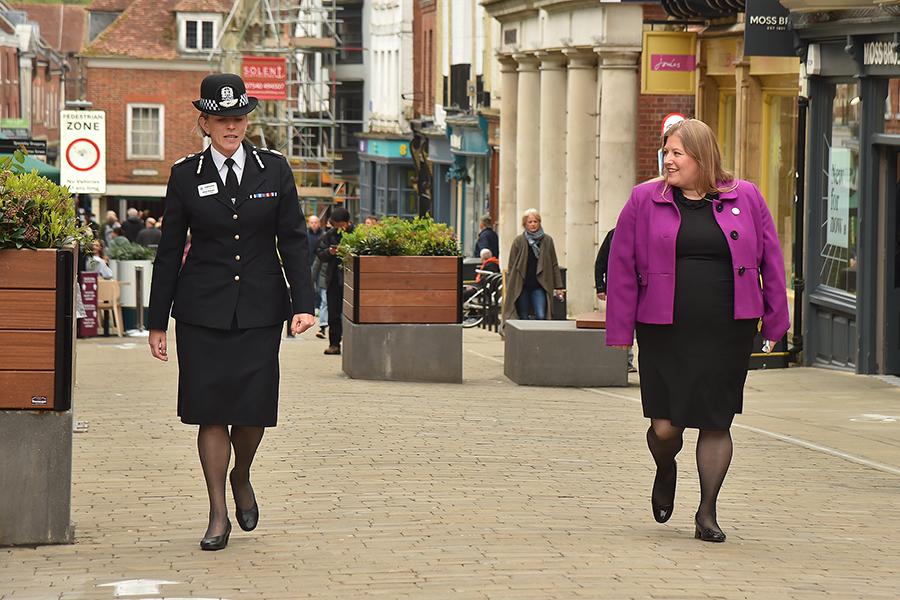 Meeting the Chief Constable and getting out into the community have been the first actions of new Police and Crime Commissioner, Donna Jones, who has officially taken up office today.

On taking the Oath Donna Jones, said “I feel incredibly humbled by the support I have been shown across Hampshire and the Isle of Wight; I am proud to be the first woman holding the role in this area, and with a track record of delivering in public office I will make sure I deliver on the pledges I made during my campaign and those I have undertaken today in signing the Oath.”

Reflecting on the meeting, Donna Jones said: “Over the last year I have been listening to our communities and today, as my first action, I put the key concerns that were raised with me to the Chief Constable.

“People have told me that they don’t feel as safe as they used to, that they want to see more police officers and that when they do report crime they would like feedback. I went through my proposals to tackle these with the Chief Constable. I outlined that my priorities will be recruiting 600 more police officers, removing red tape and bureaucracy so officers can spend more time on patrol and a review of 101 and 999 service so when people do report a crime they get feedback.

“It was a positive first meeting and I look forward to working with the Chief Constable and her team to bring crime down and make Hampshire and the Isle of Wight some of safest places to live.”

Chief Constable Olivia Pinkney said: “On behalf of all of my officers, staff, and volunteers, I’d like to welcome Donna Jones as the new Police and Crime Commissioner who will continue to give a voice to the public to ensure the safety of our communities and effective criminal justice in Hampshire and on the Isle of Wight. I look forward to working with the new Commissioner on topics that she has already highlighted during her campaign, such as the recruitment of new officers into the Constabulary, reducing violence, and continuing to support young people so that they do not become involved in the criminal justice system at an early age”.