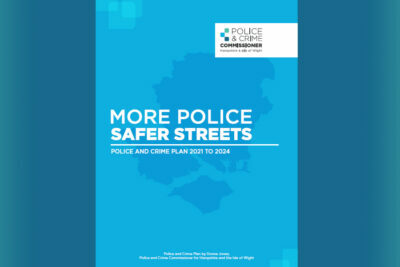 Commissioner Jones said: “So far almost 3,000 people have taken the survey about the policing priorities for 2021-2024 that are outlined in my Plan, which is great and I thank those who have had their say for taking the time to do so. I would very much like to hear from as many people as possible to make sure that my Plan truly is tackling the issues that are of most concern to all our communities, as well as those offences that cause the most harm.

“My vision as your Commissioner, as a parent, and as a citizen is that Hampshire and Isle of Wight are places children and elderly people can walk the streets without fear. More police means more detection and prevention, and my number one priority is to have 600 more officers by end of 2023.”

The full draft Plan is available to read and download with the public having until 14 October 2021 to express their views either through a quick online survey or by submitting more detailed comments.

Donna Jones added: “In my first COPS Scrutiny session with the Chief Constable on Facebook Live last week the questions from members of the public watching were very much a reflection of the priorities I have put in my plan. Topics raised included, the need for more officers on the streets, improving crime reporting, reducing anti-social behaviour and increasing the number police stations. Not only do these feature in ‘More Police, Safer Streets’, but I have also already made a start on tackling these with the introduction of an ASB Taskforce, a review of 101 and ways to report crime, assessing the police estate and welcoming new officers into the Constabulary.”

The Police and Crime Commissioner’s first public scrutiny session, ‘COPS’ (Commissioner’s oversight of policing services), with the Chief Constable was held as a Facebook Live event on 8 September so that any members of the public could post questions live, while they are watching.   Anyone wishing to submit questions for future COPS sessions can do so by emailing opcc.comms@hampshire.police.uk