A hate crime is when someone commits a crime against you because of your disability, gender identity, race, sexual orientation, religion, or any other perceived difference.

It doesn’t always include physical violence. Someone using offensive language towards you or harassing you because of who you are, or who they think you are, is also a crime. The same goes for someone posting abusive or offensive messages about you online.

If it happens to you, you might be tempted to shrug it off. But if you report the hate crime, we can investigate and stop it from getting worse – either for you or someone else.

A hate incident is any incident which the victim, or anyone else, thinks is based on someone’s prejudice towards them because of their race, religion, sexual orientation, disability or because they are transgender.

Not all hate incidents will amount to criminal offences, but it is equally important that these are reported and recorded by the police.

Evidence of the hate element is not a requirement. You do not need to personally perceive the incident to be hate related. It would be enough if another person, a witness or even a police officer thought that the incident was hate related.

Hate crime can fall into one of three main types:

Physical assault of any kind is an offence. If you’ve been a victim of physical assault you should report it. Depending on the level of the violence used, a perpetrator may be charged with common assault, actual bodily harm or grievous bodily harm.

Verbal abuse, threats or name-calling can be a common and extremely unpleasant experience for minority groups.

Victims of verbal abuse are often unclear whether an offence has been committed or believe there is little they can do. However, there are laws in place to protect you from verbal abuse.

If you’ve been the victim of verbal abuse, talk to the police or one of our partner organisations about what has happened. You’ll find a list of them on our How to report hate crime page.

Even if you don’t know who verbally abused you, the information could still help us to improve how we police the area where the abuse took place.

The offence of incitement to hatred occurs when someone acts in a way that is threatening and intended to stir up hatred. That could be in words, pictures, videos, music, and includes information posted on websites.

What we are doing 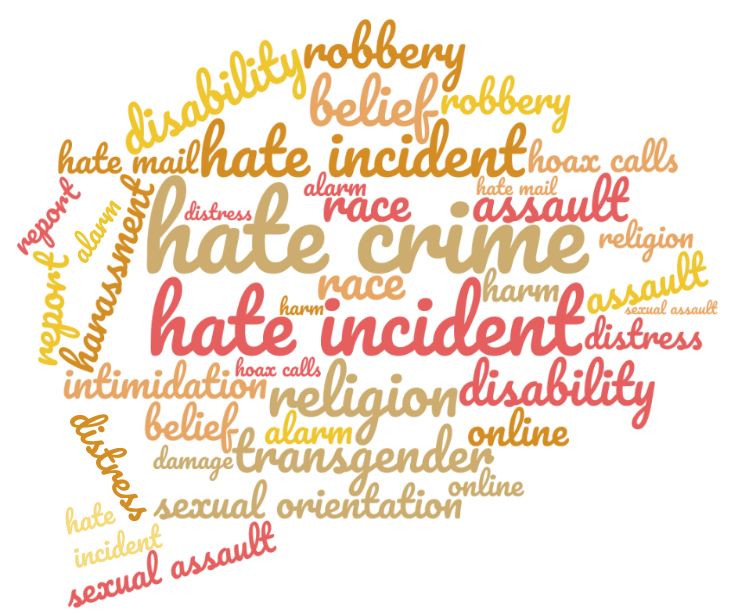 Talk it over – discussions on hate crime

What is hate crime?

Read the prosecution guidance and more from the CPS

What you can do if you’ve experienced hate crime